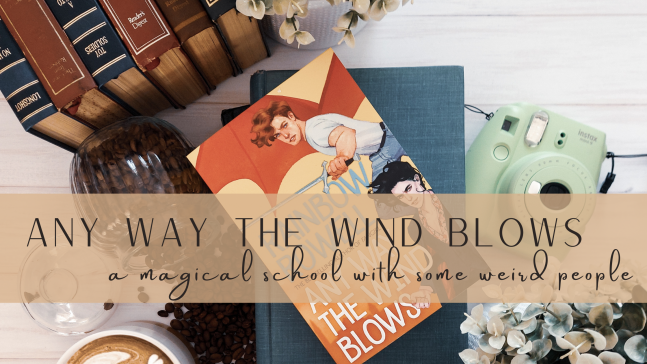 So firstly, I want to start by saying, this isn’t typically the kind of books I enjoy. So when I reviewed this book I did not take my personal taste into account.

That being said this book was interesting. The entire series for that matter. I really enjoyed the characters, there was enough intrigue to get me to the end and the writing was quite enjoyable. I liked the banter between the characters, although the teen angst was a bit too much for my personal preference, it wasn’t unbearable.

All in all I get what they hype around this series is, and definitely like the idea of a new popular school for magic existing. Watford is quite fascinating.

In Any Way the Wind Blows, Simon and Baz and Penelope and Agatha have to decide how to move forward.

For Simon, that means deciding whether he still wants to be part of the World of Mages — and if he doesn’t, what does that mean for his relationship with Baz? Meanwhile Baz is bouncing between two family crises and not finding any time to talk to anyone about his newfound vampire knowledge. Penelope would love to help, but she’s smuggled an American Normal into London, and now she isn’t sure what to do with him. And Agatha? Well, Agatha Wellbelove has had enough.

Any Way the Wind Blows takes the gang back to England, back to Watford, and back to their families for their longest and most emotionally wrenching adventure yet.

This book is a finale. It tells secrets and answers questions and lays ghosts to rest.

Carry On was conceived as a book about Chosen One stories; Any Way the Wind Blows is an ending about endings. About catharsis and closure, and how we choose to move on from the traumas and triumphs that try to define us.